On Sunday, June 3, 2018, another thematic stroll through the New Cemetery in Belgrade entitled „Outstanding Love Stories of Great Serbian Men and Women” was attended by significant number of visitors. Neither the rain, nor temporary thunders stopped the visitors to patiently listen to the intriguing stories about love, disappointments, passions and emotional ups and downs of many charismatic men and women buried at the New Cemetery, while enjoying the stroll through one of the most exquisitely maintained park areas in our city.
After brief introduction to the history of the New Cemetery of Belgrade, the stroll started at the final resting place of Dr. Vladan Đorđević, physician, prime minister, mayor, author, intellectual and founder of the New Cemetery. During his studies of medicine in Vienna, Vladan Đorđević met sixteen years old Paulina Bittner, with whom he first had an illegitimate child, but in the subsequent period, after overcoming many difficulties, they spent more than fifty years together in happy marriage. According to certain sources, Paulina gave birth to as many as 15 children during this marriage. Many years later, now in the role of match -maker, he used to say that the marital bliss sometimes lies somewhere else and it is not exclusively related to physical beauty or falling in love.
The stroll continued through the Arcades and the Alley of the Greats, where the visitors were able to hear the story of selfless love at the crypt of the author, social and political activist Petar Kočić. At the grave site of the famous painter, poet and bohemian Đura Jakšić, the citizens of Belgrade heard the heartbreaking account on difficult life and suffering of the famous painter, including the intriguing story about the great beauty, inn-server Mila, to whom the famous verses were devoted (“Ana pours, Ana serves, but for Mila my heart mourns….”). Unfortunately, Mila accepted the marriage proposal of a popular actor, Đura Rajković, with whom she subsequently joined the traveling theater company.
Before the Ružić family crypt, the visitors were able to listen to the  emotional narrative on sacrifice and timeless love of Vida Ružić and author Miloš Crnjanski. Vida Ružić was a daughter of the Minister of Education and author Dobrosav Ružić (i.e., the „Royal librarian”, famous for the saving one of the earliest Serbian manuscripts, „Miroslav’s Gospel” from devastation), sister of the well-known football player Jovan Ružić and one of the most beautiful women in Belgrade at the time. In spite of strong opposition by Ružić family, Crnjanski sold his house in Pančevo and followed his love to Paris, where her family sent her to separate the young couple. In line with her mild and understanding character, Vida Ružić calmly dealt with her genius husband’s jealousy and womanizing and always managed to smooth out the situation, in spite of Crnjanski’s s inappropriate outbursts and other public scandals he was involved in.
The next stop was the final resting place of the author Simo Matavulj, famous, among other things for being able to make the French author Anatole France laugh, by telling jokes in French. In addition, he used to say that he had served Bacchus and Venus all his life. His first great love was sixteen years’ younger teacher at the Higher School for Ladies, Milica Stpanović, who unfortunately died soon after giving birth. Matavulj had great difficulties to cope with the loss of his love. Persuaded by his friends, he finally agreed to marry the rich widow Ljubica Dimović, which and enabled him to forget about financial worries and to travel all over the Europe and Mediterranean.
In addition, the visitors were able to see the grave of much disputed but loved journalist Milicа Jakovljević, Mir- Jam, her career, love interests and her adoration of chocolate boxes. In spite of the fact that she predominantly wrote about love and marriage, she never got married herself. The following is a quote form one of her books: „Loneliness followed me throughout my life. The loneliness builds my independence. Many people complain about loneliness, not realizing how much beauty can be found in such a life, when your only companion is a book…”. Her longest lasting and perhaps greatest love was a popular actor Boža Nikolić.
The stroll then led to the final resting place of physician and author Laza Lazarević. During his medical studies in Vienna, Laza Lazarević met Ana, Conservatory student and daughter of boarding house owner, Unfortunately, this young love didn’t have a future, to patriarchal morality and prejudices. However, Laza never forgot his Viennese love and much later made it immortal in his short story „The German Girl”.  Honoring the wishes of the visitors, the stroll was extended, so the most persistent were able to see the crypt of the famous poet and diplomat Milan Rakić. 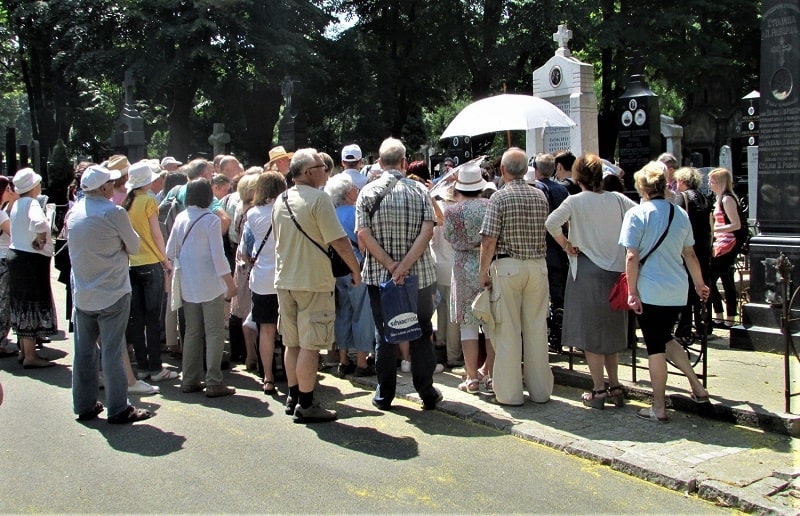 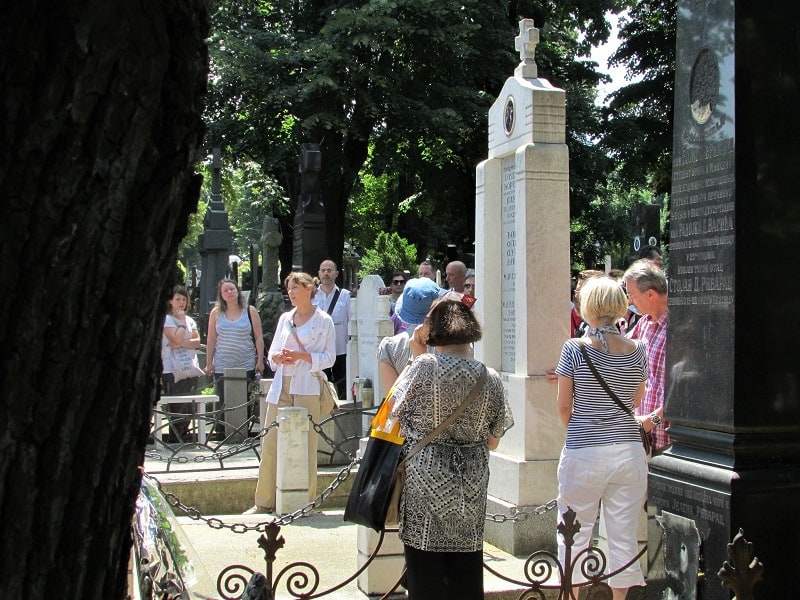 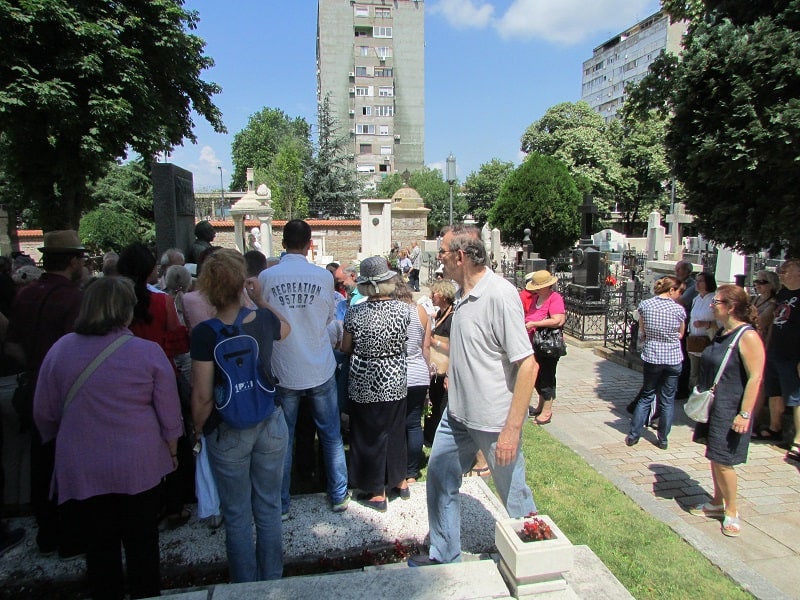 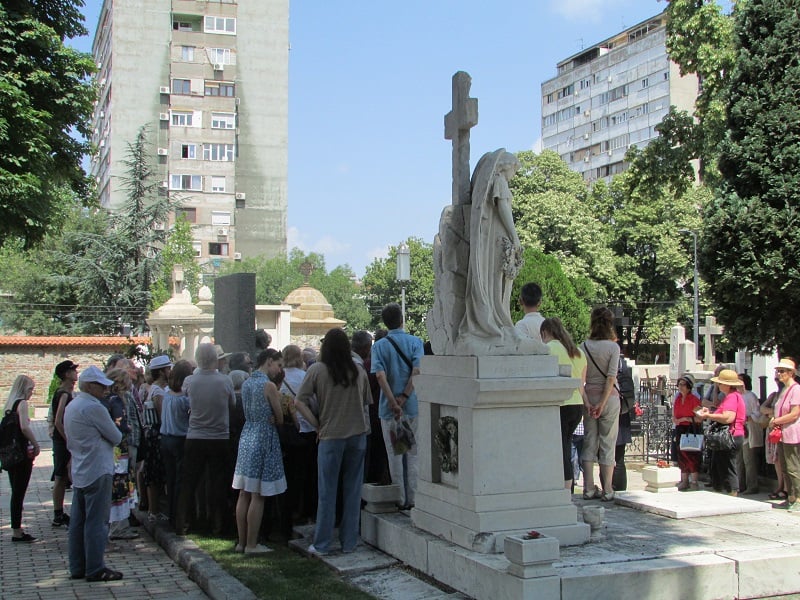 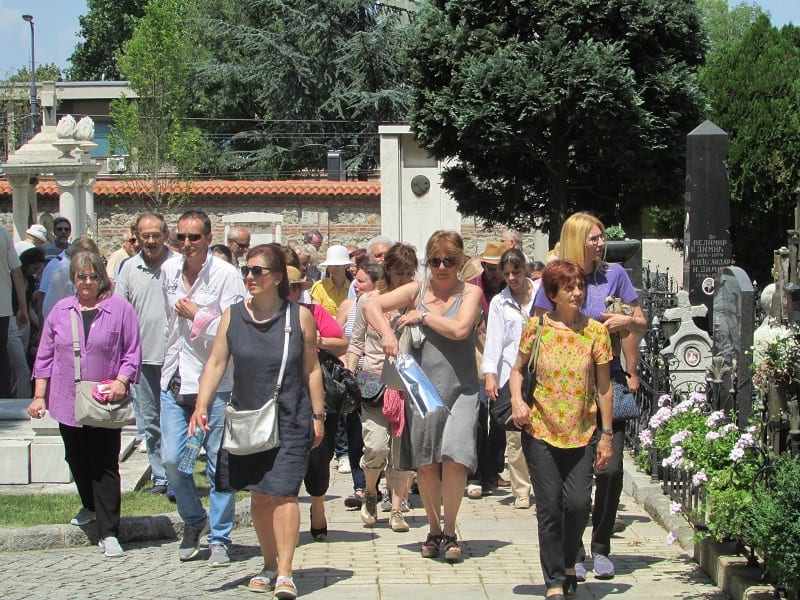 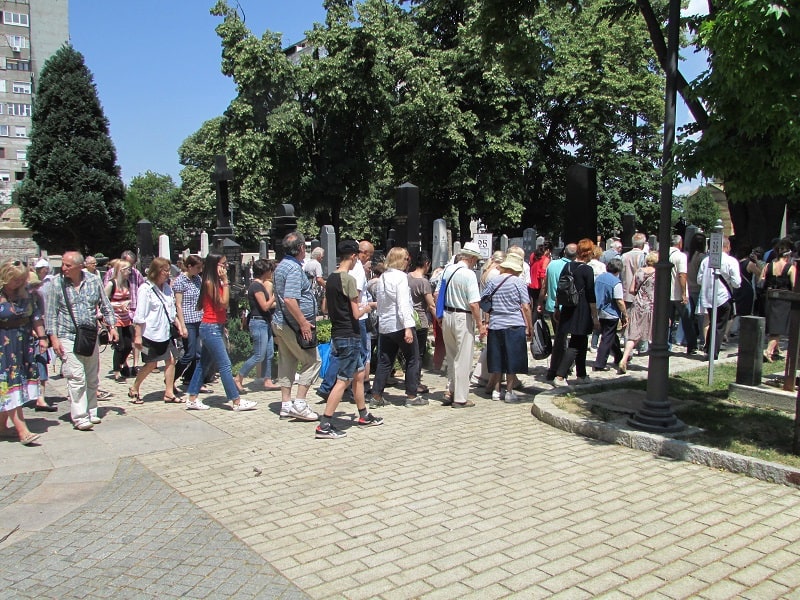 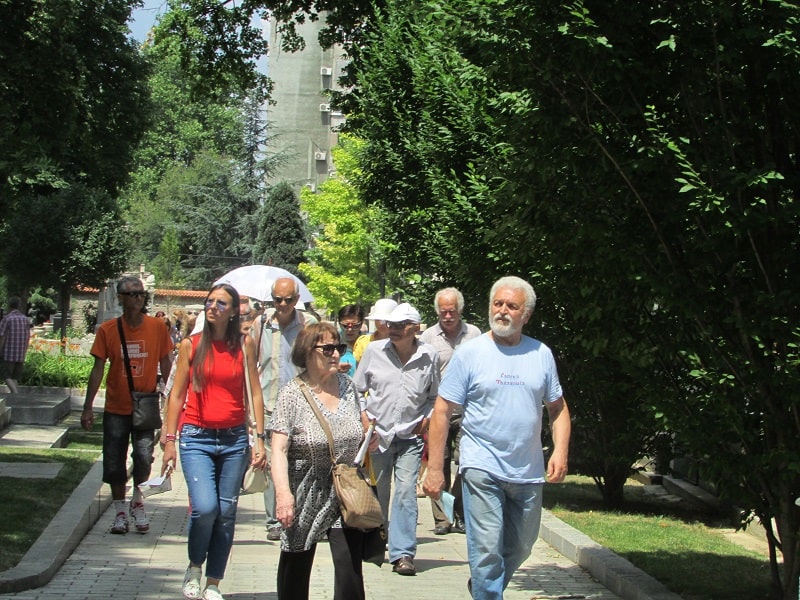 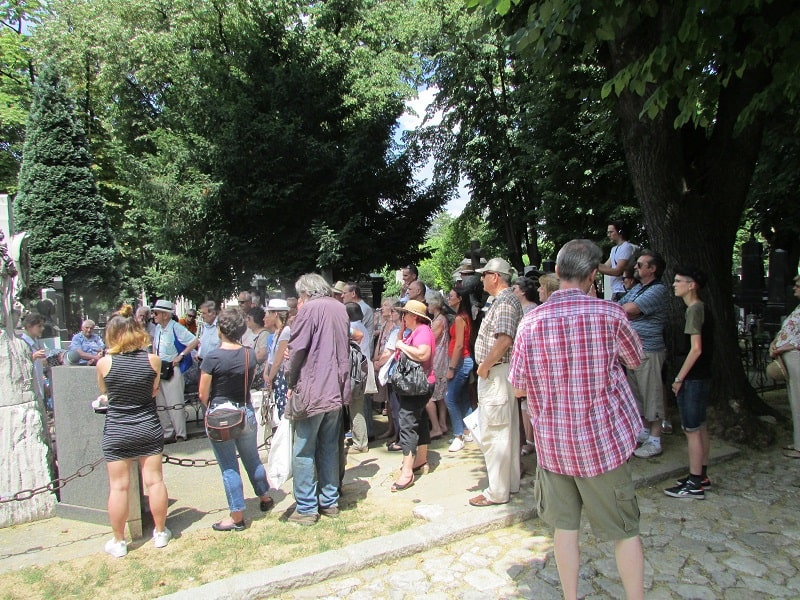 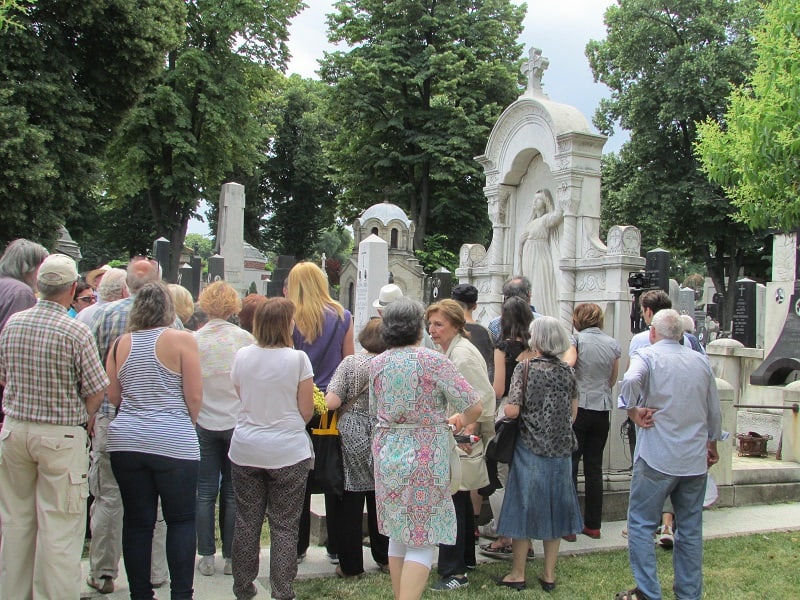 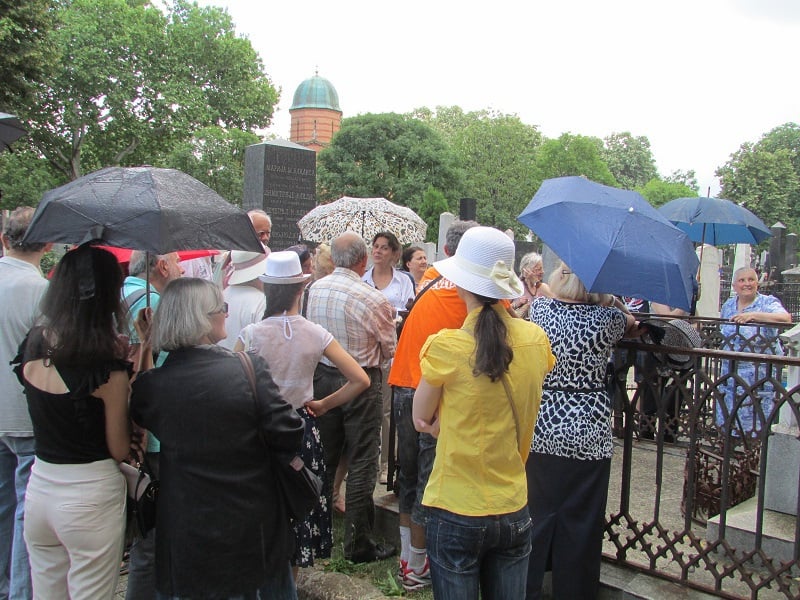 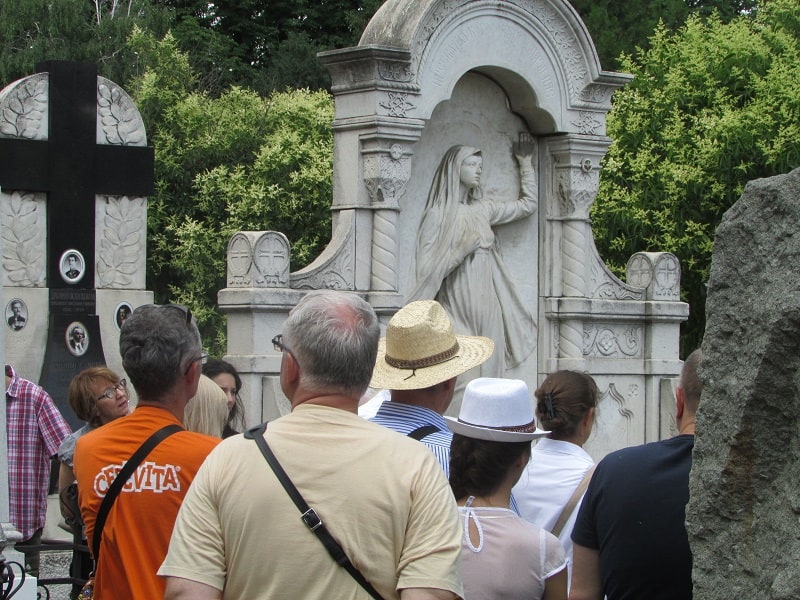 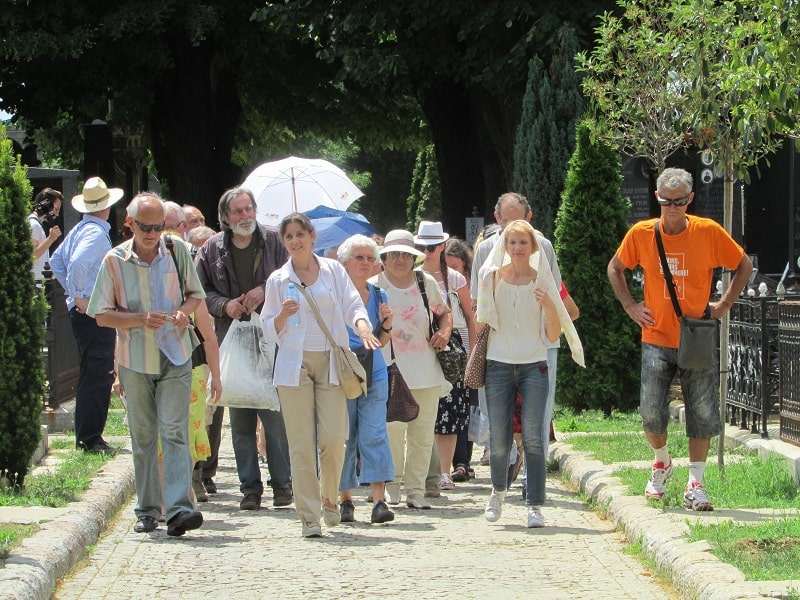 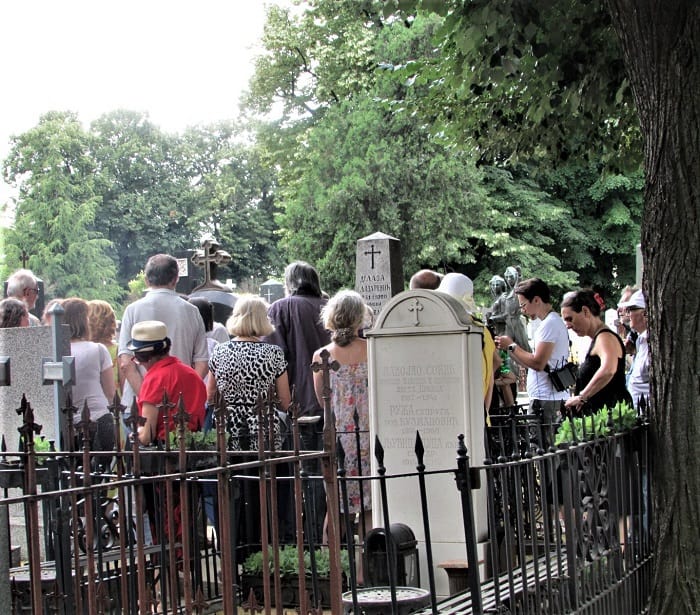