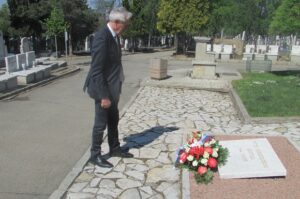 The highest number of casualties in the course of April Allied 1944 air strikes, was recorded on April 16 and 17, i.e., the first and second day of the Orthodox Easter. In Zemun, Ikarus, Danubius, Zmaj and Teleoptik factories were destroyed, in addition to the railway station and airport. In Belgrade, the Rogožarski factory and neighboring residential areas were completely demolished, including the shipyard, oil refinery at Čukarica and portion of the Belgrade railway station. Sajmište concentration camp was also hit. Bridges over Sava and Danube were damaged. In the course of the Easter air strikes of 1944, maternity hospital in Krunska street was destroyed. Extreme devastation happened in the vicinity of Bajloni’s green market, where the misfired projectile killed 200 people, not to mention area of Pašino brdo, where a significant number of civilians were killed. Albania Palace, Terazije Square, building of Technical and Law Faculties, several hospitals, humanitarian organizations and churches were also hit. 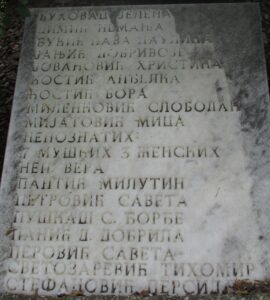 In memory of the victims, the Memorial Cemetery of 1944 Belgrade Airs Strikes Victims, was established at the New Cemetery of Belgrade in 1966, according to the design of the architect Milica Momčilović. The cemetery consists of 11 mound with 15 marble tablets, with engraved names of 313 identified and 165 unidentified persons killed in Belgrade Air Strikes of 1944.

Great people of goodwill – thematic stroll through the New Cemetery on the occasion of the 2017 European Heritage Days Sep 27, 2017